Christmas is around the corner, and Teams is your present

byOurTechBlog 19 Dec inCloud, Email, Technology Comments Off on Christmas is around the corner, and Teams is your present 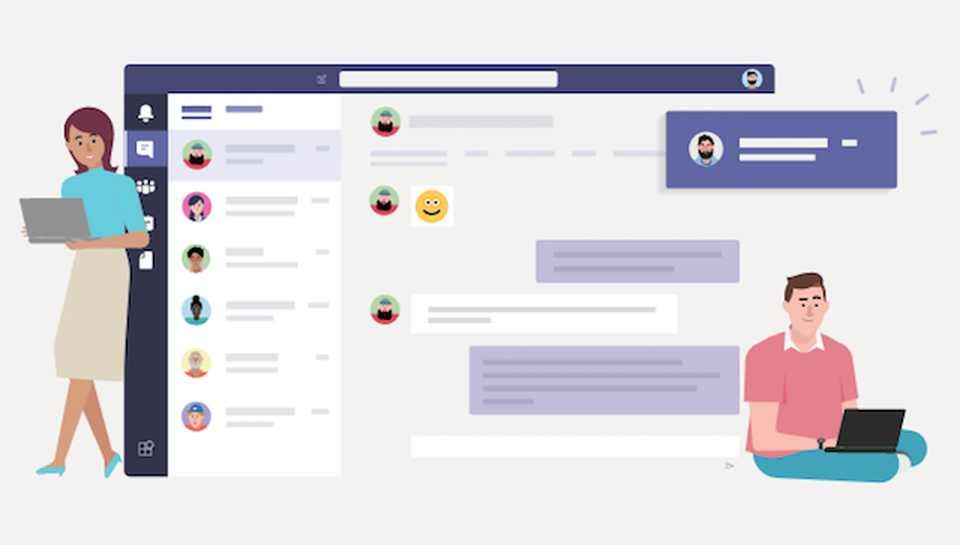 Santa's got nothing on modern technology

Let’s clarify something quickly before we start. Microsoft Teams was launched worldwide in March 2017, so really it’s not a Christmas present. However, if you’ve read my Future of Tech post, you’ll know that very few releases hit the big time as soon as they launch. If you had a newborn that was two years old, you wouldn’t expect backflips and handstands for a little while yet. However, although Teams is “officially” 2 years old, it’s had a bit of a leg up on the competition.

In what is news to absolutely nobody, Microsoft has a lot of money. Companies like Microsoft re-define what it means to have a lot of money, with a net market value of $946.5 billion. Microsoft only ranks second in the world to Apple in market value this year. However, the “business” world is very much dominated by Microsoft. Your computer likely runs on Microsoft Windows, and it’s just as likely that your emails are managed on a Microsoft Exchange server. And don’t forget Microsoft Outlook, Word and Excel. Bill Gates’ wallet definitely won’t.

Skype was not the first acquisition by Microsoft, and hasn’t been the last (did you know LinkedIn is also one of theirs?). First released in 2003, it didn’t take long for Skype to receive attention from the big players. In 2005, the company was acquired for $2.6 billion by eBay. Six years later, Microsoft almost quadrupled that for $8.5 billion. By the end of 2010, there were as many as 660 million worldwide users. In the 10 years since launch, Skype had gone from the new kid on the block to an absolute giant, and the way it did it was deceptively simple, by today’s standards at least. Fourteen years ago, if you wanted to call someone, you picked up the phone. Now imagine doing that internationally. Expensive, right? So Skype did something new. You could now call people…using the internet. Stop the presses.

Like most new technologies, VoIP had already been a concept for several decades. Before the year 2000, companies such as Cisco were creating new hardware to take advantage of the technology. The idea was, in essence, to use the internet to communicate rather than using good ol’ telephone lines. Ultimately VoIP is incredibly flexible and much cheaper to use, so at the time you could see why it was such an exciting idea.

Now, back to Skype. Completely free, with only the small inconvenience of creating an account. You could now call friends and family wherever they were in the world for no expense. Not only this, but the versatility of VoIP also meant video calls for the masses, and still, completely free (don’t forget to grab your cheap webcam though). It was truly magical, ruined only when your webcam refused to sit still on top of your monitor and your face was replaced by a live video stream of the back of your desk. Skype was a revolution for many, and at it’s pinnacle, found itself in Microsoft’s shopping basket.

Thanks for the history lesson. So what?

All in good time my reader. As the saying goes, “those who forget the past are doomed to repeat it”. And Microsoft has not forgotten, because ever since their original acquisition of Skype, things went downhill. At it’s core, Skype didn’t change, and that’s completely fine. No need to re-invent the wheel. However Microsoft wouldn’t have made the purchase if there wasn’t a plan, and unfortunately that plan didn’t really work out. Skype for Business was released three years after Microsoft took the helm, and rolled it in with Office 365 subscriptions, and the objective was two fold. Firstly, this was Skype’s first proper exposure to a corporate market, and Microsoft was banking on the household name to make waves. Secondly, Office 365 was still but an infant (compared to the market juggernaut it is today), so including Skype for Business in there too wasn’t such a bad idea to get the ball rolling.

Skype for Business wasn’t groundbreaking by any means, but it was functional. However, over the years user satisfaction took a dive. What had previously been a powerful but easy to use tool, Skype (and it’s Business variant) ended up becoming over complicated and messy, with consistent updates that didn’t really bring much of value while breaking what was already there at the same time. Microsoft didn’t know how to keep Skype relevant, and the software suffered because of it.

So MS went back to their (very expensive) drawing board, and forged a new idea on how they would revolutionize how you work. But they didn’t call it Skype. They called it “Microsoft Teams”. This is where we say goodbye to the old guard. While Skype may continue to be a favourite for a smaller crowd, Skype for Business will be no more as of July 2021. This will be a clean slate for a new decade.

Teams will look to achieve what Skype never could

At the surface level, Teams is just a piece of software, just like Skype. You download it, install it, and you open it up, just like anything else. But beneath the surface, Microsoft wants to create something much bigger than just a fancy piece of software, they want to change the way that you work. The key word is “collaboration”, and it’s a hole you wouldn’t (at least at first) realise needs filling. But think about it. Let’s say you need to communicate with a colleague. Drop them an email, right? What if you want to share a file with the team, that’s what cloud storage is used for. Surprise surprise, the email you sent was probably from Outlook, the cloud storage you use could be OneDrive or Sharepoint, and the file you sent could very well be a Word or Excel document. So, if Microsoft has all these individual tools for working, why isn’t there a way to bring these together? At it’s core, that’s what Teams is aiming to be, a hub from which your team can collaborate in a completely new, the future is here sort of way. So let’s go through some of the ways it does this.

The Teams experience starts with it’s “teams”, a group you create consisting of people with a common objective. This could be the accounts or sales department, or it could be your entire business. You can have as many or as few teams as you require. And each team is made up of channels. Channels roll the best ideas of the most common communication tools and wraps it together with a sleek effective interface.

Only Microsoft isn’t doing half measures. Communication doesn’t just boil down to quick texts and the occasional attachment, and Teams is ready to accommodate. Online meetings capable of screen sharing, meeting recording and instant messaging, web conferences with the power to host up to 10,000 attendees, audio conferences with global dial-in. If you want to organize a meeting, you do it in Teams. If you want to share relevant notes, files or recordings, you do it in Teams. And it scales perfectly regardless of the size of your business, big and little fish alike.

As a messaging tool, Teams ticks all the right boxes. Customizing your channels ensures easy communication covering multiple different projects or topics, giving users an easy way of tracking the details relevant to them. For anything inbetween, the Chat section has you covered with direct and group messaging (so sliding into DM’s or blasting your colleagues in group chat is still an option for the distinguished individual).

Ultimately, for all of Teams strengths with messaging and conferencing, there needs to be a little spice to really compete with other tried and tested tools that are already out there. And the way Teams links you with your files looks pretty spicy to me, especially when using Sharepoint, Microsoft’s file storage solution for businesses.

First things first, the days where you have to email colleagues your files are over. Regardless of whether you are using Chat or messaging in a channel, it’s only good news. The size limitations are higher, it’s easier, and it’s faster whether you’re sharing with 1 or 100 people.

The most interesting part however lies in the “Files” tab. There’s one of them in every channel, and each channel has it’s own storage space. When linked to SharePoint, each Team is automatically a Private Group, and each channel is a folder in that group, all stored on the cloud. Each Private Group is only accessible by it’s members. In only the few minutes it takes to create your teams and channels, you’ve given your business not just a functional file structure with built in permission settings, you’ve also got an incredibly powerful communication tool built around it. It’s like having Outlook, File Explorer and Skype rolled into one, and for anyone looking for an easier way to work, an absolute godsend.

Lets keep Outlook in mind for a moment. Last month Microsoft had their yearly Ignite conference, and a number of upcoming features for Teams were announced (if you’re interested, the full list is here). I’m going to focus on the tighter integration with Outlook. There’s no doubt that Outlook is the de facto email client for the western world, and if anyone says any differently they’re lying and won’t be getting any Christmas presents this year. The update in question is an Outlook add-in that will allow you to share a full email conversation to Teams (including attachments).

In addition, private and pinnable channels will become available, as well as a tasks panel, in which everything across Microsoft To Do, Teams channels, Planner, and Outlook will be visible in a single view.

Well, not 100%. We could only cover the biggest and potentially most important features that Teams could bring to your workplace. The wheel is not being re-invented but by no means did that make Teams task any easier, just look at Skype. When it was evident that it didn’t make the grade, Microsoft made the more ambitious step and went bigger. At Teams’ foundations we don’t only find Skype, but the rest of the Microsoft ecosystem as well.

We think Teams has massive potential, and now that the word is spreading, Microsoft is likely to keep it’s foot on the gas and continue releasing frequent updates and new features. Because of this, the best way to truly understand what the software is capable of is to give it a go for yourself. If you have Office 365, there’s a good chance you can start using Teams right now, and if you don’t, there’s no time like the present. We’ve helped a number of businesses make the switch, if you would like to be the next or want to know a little more, drop us an email at info@ourtechteam.co.uk, alternatively you can call 020 3794 1414.

And finally, from all of us at Our Tech Team, we wish you a very merry Christmas, and a happy new year!

Signed, Connor B from OTT
www.ourtechteam.co.uk